Desertification Affects Us All 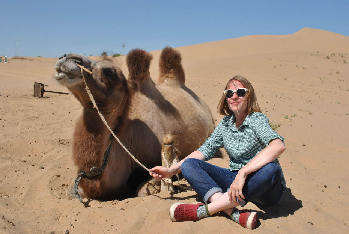 MY hometown is near Frankfurt, in a green corner south of Hessen, where the region of Bergstraße, with its lush vegetation above the Rhine Valley, meets the green foothills of the Odenwald. It might appear, then, that deserts and aridity don’t really affect me and the people of my hometown.

The desert became more real for me, at least theoretically, in 2011 when I first came to Beijing to work. Before I arrived, I had read in an old German travel book that China’s capital is often hit by severe sandstorms from Inner Mongolia. So mentally I was prepared for the worst.

To my surprise, I did not experience my first real sandstorm until April 2015, four and half years after my arrival. That afternoon, within minutes masses of dusty clouds assembled over the skyline of Beijing’s central business district and shrouded the twinkling glass facades in a dense yellow mist. A few hours later, however, the specter had passed.

The reason why Beijing has been spared heavy sandstorms like that last April can be found a couple of hundred kilometers away from the capital, in Inner Mongolia. Especially in the area around the Kubuqi Desert, the world’s seventh-largest desert and that closest to Beijing, huge efforts have been made over the past decades to fight desertification.

We travelled by bus to the congress center in Ordos City, west of the Kubuqi desert region. The Fifth Kubuqi International Desert Forum took place here last July 28 to 29. Experts from all over the world gathered there, not only to exchange knowledge and new research results, but also to take a closer look at the achievements that have been made in fighting desertification.

We drove rapidly over the narrow highway on the edge of the desert. But what met our eyes, above all, was: green. A dense vegetation belt rushed past our car window – grasses, bushes and trees, as the golden silhouettes of desert dunes merely glimmered in the background. This was in no way the kind of desert panorama I had expected.

During the last 27 years, the Inner Mongolia regional government, in close cooperation with Elion Resources Group and the Green Silk Road Fundation that the group founded, local residents, and with the help also of foreign experts, has successfully reforested 6,000 square kilometers of dunes in the Kubuqi desert area. One of the most astonishing achievements is the establishment of a 240-km-long green ecological barrier, which we passed on our way to the congress center. Today, it forms effective protection against sand dune expansion.

The local government and Elion Resources Group built modern roads through the desert and erected electricity, water and telecommunications systems. Besides desert control, officials also invested in the development of the local industry, especially solar energy.

Through all these efforts it was possible to do even more than successfully fight desertification, which severely threatens the livelihood of local farmers. The overall living conditions of local people have also significantly improved through the creation of new job opportunities and financing through new industry revenues of social infrastructure like schools and residential areas.

Moreover, under the umbrella of the United Nations Convention to Combat Desertification (UNCCD) Elion Resources recently established the Green Silk Road Foundation, to share the experiences of the Kubuqi region with other countries along the new Silk Road.

Monique Barbut, UNCCD executive secretary-general, stressed during the forum that the consequences of desertification are by no means geographically limited to certain areas. “Nighty-nine percent of the world’s nourishment still comes from land areas. If opportunities on the land decrease, people flee to the cities.”

So my new hometown of Beijing also strongly benefits from the positive changes that have taken place in the desert regions of Inner Mongolia. China’s capital not only gains from such ecological changes as the reduction in sandstorms. Increases in fertile farmland on the edge of the Kubuqi Desert influence areas of cultivation that are vital to supplying the agglomerated Beijing area. These changes also make the North China hinterland more attractive, which means fewer people flee to the capital.

The issue of desertification is moreover much closer to Germany and the people of Europe generally than some might think. José Manuel Barroso, former president of the European Commission and former prime minister of Portugal, said at the Kubuqi Forum: “An aspect of the illegal immigration with which European states are confronted at the moment is attributable to ecological causes.” Many of those illegally finding their way to the European Union come from Africa, Barroso said. “And Africa is one of the regions worldwide that suffers most from desertification.”

Considered as a whole, desertification is not something that happens far away; it affects all of us. That is why we should all join in the fight against it.