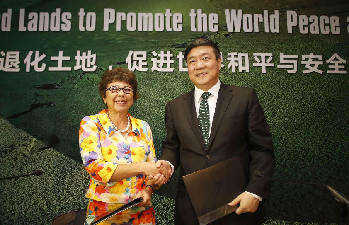 DURING the Fifth Kubuqi International Desert Forum 2015, Monique Barbut, the executive secretary-general of the UN Convention to Combat Desertification (UNCCD), granted China Today an exclusive interview. She praised the Chinese government for taking on more global responsibilities in the process of international sustainable development and expressed gratitude to Chairman Wang Wenbiao of Elion Resources Group for the great job he and his company had done to create an ecologically and economically sustainable model that is replicable in other developing countries.

Monique Barbut fully affirmed the efforts that the Chinese government had made in pushing forward and implementing the UN Sustainable Development Goals (SDGs), especially in achieving the goal of land degradation neutrality passed by the Rio+20 in June 2012. As a world major economy, China has taken on higher responsibility for global issues, among which climate change is one of the most important as a means to offset carbon emission.

Barbut also pointed out that China remains a developing country, and that the swelling economy poses severe challenges to the government. On one hand, the authorities have to meet the demands of people’s higher living standards to keep up with European nations and the U.S.; on the other, China boasts roughly 20 percent of the world’s population but only seven percent of its arable land, and 40 percent of China’s land is degraded to some extent. If the productivity of land decreases further, opportunities for rural, land-dependent communities will evaporate. Nowadays, over 10 million rural Chinese people migrate to cities every year.

In the future, China faces the dual challenges of scant resources and exuberant demands. So it has no choice but to succeed in environmental issues. “It is wise to discover a green economy pathway to achieve sustainable development. The whole world is experiencing a shortage of natural resources. This is a global issue, but also an urgent call for a fast developing China,” Barbut said. 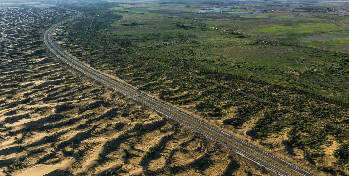 The Kubuqi Desert is now covered with vast green fields.

During the forum, Elion was nominated as one of the two winners of the UNCCD “Land for Life Award.” “Though I have a good personal relationship with Chairman Wang Wenbiao, I can still draw the impartial conclusion that he has made a remarkable achievement in desertification prevention and control,” Barbut told the reporter.

She went on to say that the past 27 years had seen Elion’s success in restoring the ecology through developing sustainable economy. The group has curbed desertification in over 10,000 sq kilometers and turned 6,000 sq kilometers of desert into oasis. Currently, it is working with the ecological photovoltaic industry, which is expected to attract some 200,000 tourists each year. Elion not only sets an example for combating desertification, but also contributes to regional sustainable development and poverty alleviation. The pattern maintains both ecological and economic values, which is vital to the world’s most impoverished areas.

“In recent years, examples from around the world show that when communities adopt sustainable land management, their standard of living improves. What Elion has done to combat desertification has shown that new life can come from the rehabilitation of degraded land. The transformation of the Loess Plateau in China has benefited millions,” Barbut said, concluding: “The most valuable outcome is that what Elion has achieved is replicable in less developed or resource-poor countries, which is unique to this project.”

At the sixth World Parks Congress held in Australia on November 17, 2014, the UNCCD and Elion’s Green Silk Road Foundation launched the “Green Silk Road Partnership Program” to unite global partners in promoting the ecological and economic development of “The Belt and Road Initiative” through the public-private partnership (PPP) mode. Monique Barbut explained that the program was designed to plant 1.3 billion trees within 10 years to improve the environment along the Silk Road Economic Belt. Rehabilitation of degraded land will doubtless boost the region’s adaptability to climate change and so enhance economic and social development levels.

Monique Barbut admitted that countries along the Silk Road were in different positions and generally lacked resources. For example, the Central Asian countries Tajikistan and Kazakhstan are suffering from disastrous levels of land degradation. China’s initiative is the best hope for most countries to fight desertification.

Monique Barbut also expressed her best wishes for the Green Silk Road, saying that 1.3 million hectares of land are designated for restoration. Furthermore, the complicated situations in most countries along the route also have to be considered; the UN will be watching and offering scientific and technological support.

Monique Barbut spoke highly of the forum. “It provides a cherished platform for us to share scientific and technological policies, and encourages institutional innovation, regional and global cooperation, and coordination among governments, enterprises, and communities. Through discussion and exchange on this platform, we have come to realize that to achieve a dignified way of life for people through sustainable management of land is both necessary and feasible. ”

Ms. Barbut agreed that fruitful and substantive achievements had been made at the forum. There is a consensus to establish a “Global Desert Green Economy Alliance” with the advocacy of Secretary-General of Kubuqi International Desert Forum Wang Wenbiao, former European Commission President José Manuel Barroso, former Chairperson of the African Union John Kufuor, and other delegates. The news is to be announced during the UN Climate Change Conference in Paris in December, which is sure to promote the goal of land degradation neutrality by 2030 and make more contributions to tackling global climate change. 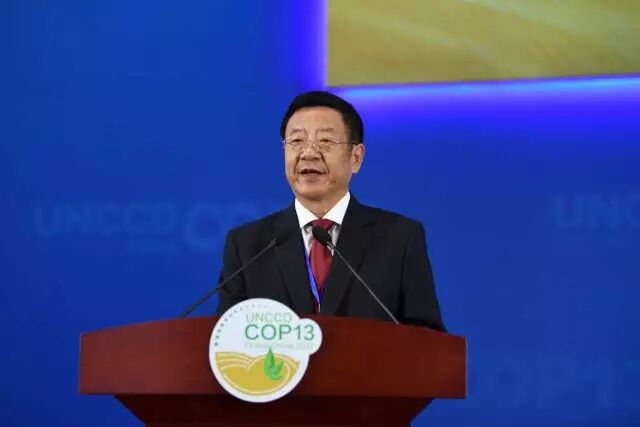